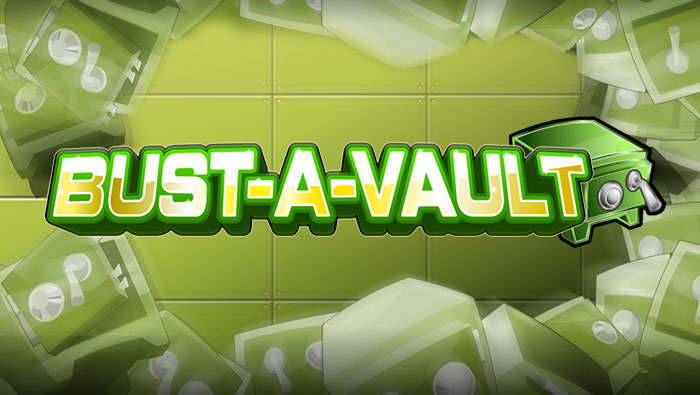 Recently tasked with trying out Bodog Casino’s Bust-A-Vault – a classic 3-reel, single line game powered by Rival – we’re fully convinced that we’ve found the ideal online slot game for beginners and classic slot lovers alike. From its crystal clear interface and convenient in-play paytable to its simple mechanics, you’re in for incredibly smooth spinning sessions when you play this game. Let’s start with the basics: theme, graphics and sound. As far as the storyline goes, it’s pretty vanilla. We’ve seen the bank heist theme many times before, and the fact that the only symbol in line with the theme is a Green Vault is a little disappointing.  Considering this game is an i-Slot designed by Rival Gaming, we felt the graphics could have been a little stronger; however, the simplicity of the artwork makes for one of the smoothest slot interfaces we’ve ever seen. As for the soundtrack, it’s perfectly suited to the theme, capturing the intensity of a bank heist without being overbearing.

The Wild Multiplier Symbol is the only feature Bust-A-Vault has to offer. The Green Vault acts as a wild, which substitutes and multiplies winning combinations by the multiplier listed on the paytable. Line up three of these symbols and you’ll score 2,000 coins – the game’s maximum payout. Another symbol you will want to watch out for is the Cherry. If one, two or three of them appear anywhere on the payline, you’ll be able to add a few more coins to your bankroll. What we liked most about this game is its built-in paytable. No need to leave the main screen to figure out what you need to line up or why you’ve won. Any time you hit a winning combination, the amount you win is highlighted in the table, alongside its corresponding symbol combination. This allows beginners to fully grasp why they’ve won and what it will take for them to win more which, in more complex games, isn’t always so obvious.

Though this casino game is ideal for anyone new to the world of online slots, intermediate and advanced players be warned: if you’re in the mood for a challenge, you may find this game a bit of a snooze. That being said, we’re giving Bust-A-Vault 3.5 stars and urge all beginners to make their casino debuts by spinning this game. The theme and graphics may be plain, but more often than not simplicity can go a long way, as is the case with this game.

Baccarat: The Game of the Rich and FamousCraps Facts: Craps are the new BlackjackGet Paid for Playing Hard – Casino RewardsSpy Game is the Bomb