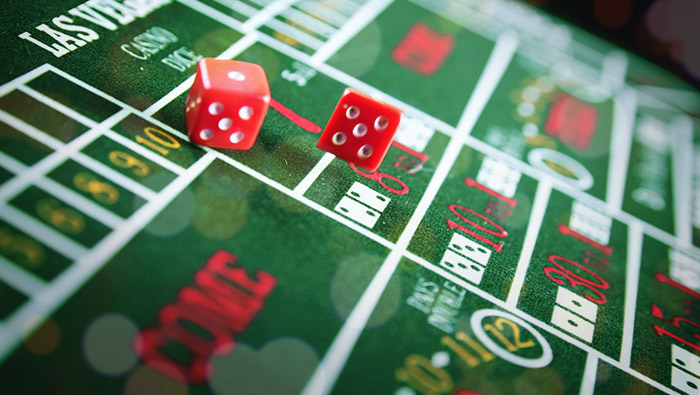 It’s time to start giving a crap about craps. This well-known table game is a staple in pretty much every casino out there. Have you seen people huddling around a table, cheering outrageously? That’s probably a craps table. Read on to discover everything you need to know about the popular dice game.

Craps is based on the 2000-year-old British dice game known as Hazard that was brought over to Nova Scotia and New Orleans by French settlers. In this archetypal version of the game, one of the rolls was referred to as “crabs,” but, because it was said in a French accent, Americans misheard it as “craps.” The Americans simplified the game, the name stuck and the rest is history.

Thanks to the popularity of craps, one dice manufacturer in Las Vegas supplies casinos with over 25,000 pairs of dice every month—that’s a lot of dice. The reason they manufacture so many is because the industry requires that dice be replaced every 2,000 rolls. The strict practice is meant to prevent the dice from being altered in a way that could give players an edge.

If you’ve ever wondered why Frank Sinatra sang “a lady doesn’t wander all over the room and blow on some other guy’s dice,” the lyric was in reference to a popular superstition that a lady blowing on your dice before you roll will achieve winning results. The Luck be a lady lyrics could therefore be interpreted as a commentary on the fidelity of luck.

In most games of craps the dice must make it to the furthest end of the table in order to be considered valid. The shooter should be very careful not to roll them too far, however, since another common superstition is that it’s bad luck if the dice bounce off the table.

So there you have it – Craps has a fascinating backstory of its own. Head on over to our casino today and who knows, maybe lady luck will be there waiting.

Play Secrets of a Geisha at Bodog TodayFive Massive Casino Wins in VegasBaccarat: The Game of the Rich and FamousGet Paid for Playing Hard – Casino Rewards