Get your Golf Game On with Hole in Won 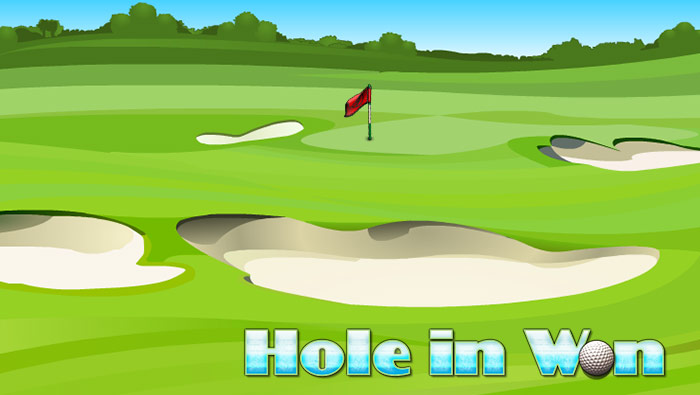 This one goes out to all the golfing enthusiasts out there! After taking this relaxing i-Slot™ by Rival for a golf-cart ride,  we’re going to say that we had a good time, but, at the same time, were left feeling a little confounded by the lack of a cohesive storyline, which is, generally, what most of us expect from slot games of this variety. Hole in Won is one of many new Rival slots that have been added to Bodog Casino’s ever-growing collection of online games. From its golf-related theme to its simple interface, we’re sure that more ‘traditional’ slots players – i.e, those who don’t have a lot of patience for over the top graphics – will find what they need here.

Don’t expect a great deal of animation or fancy graphics here. Simplicity is key in this game; the theme is there, though – even though a clear story isn’t. Thematically, the game does a fantastic job with emphasizing golfing symbols and paraphernalia – with symbols and icons ranging from Gold Shoes and a Golfer to an Umbrella and the number 1. There’s no nonsense, no fluff – just golf, and the chance to score a pretty penny. This is actually pretty good when you think about it. You don’t want too many distractions during gameplay, especially when you’re on the lookout for the big payout and winning combinations. As for the game features, players can expect the standard 5-reel, 15-line configuration, but fitted into an i-Slot™, which means it’s far more interactive. The game’s best feature has to be, hand down, the bonus round. Most slot games have a rather repetitive bonus round, with the same features on loop. Well, Hole in Won does things a little differently: this interactive slot game offers an entirely new bonus game, featuring nine unique holes of a mini golf course. This keeps things entertaining and keeps the momentum going, which, in a game like Hole in Won, can diffuse if there isn’t enough diversity.

Features aside, the game’s jackpot of only 1,500 coins isn’t exactly the most appetizing, but it also means it’s inexpensive to play and certainly entertaining enough. Ultimately we’re giving this game 3.5 stars.