Pistols & Roses: The Only Way to Rock a Slot 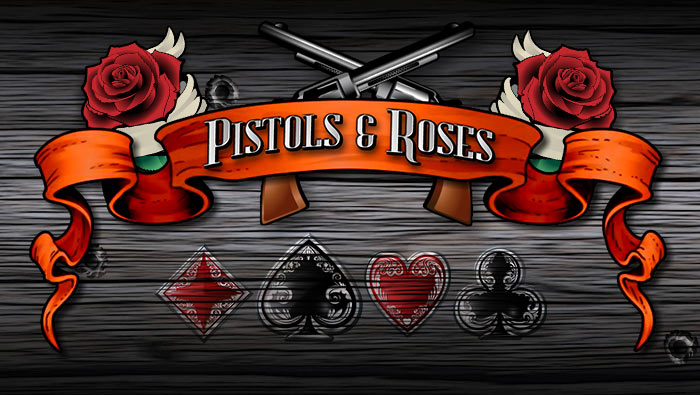 You don’t need to be a metal-head or biker dude to take a wild ride on Pistols & Roses. We had the pleasure of trying out Bodog Casino’s new online slot and we have to say, we’re impressed!  This no-nonsense 3-reel, 1-line casino game is not only easy to play, but also comes with clean-cut graphics, a smooth interface, and as to be expected, a killer soundtrack. The first thing you’ll notice when you fire up this game is just how easy it is to navigate. There’s nothing worse than an online slot that has too much going on, whether it be due to overwhelmingly busy graphics, tiny buttons, a cluttered paytable or the like. The game graphics are simple, fun and in-line with the theme, so don’t expect anything too crazy or overpowering.  The “Menu” button is easy to find and lets you change the speed of the game, adjust or mute the sound, transfer to full-screen mode and switch from free practice play to real-money spins without having to exit the game.

As far as features go, minimalism is the route the developers chose to take. With just three reels, a single payline and nine symbols, winning combinations appear quite frequently, especially if you’re betting the maximum.  Should you click on the paytable, you’ll notice that every individual symbol and symbol combination are clearly displayed beside their payouts, further adding to the game’s ease of play. Red 7s are considered scatter symbols, awarding anything from 6 to 360 coins depending on how many you can line up and how much you bet per spin. The true star of the show, however, is the Wild Rose symbol,which acts as a wild.  If the rose appears on the payline, it replaces any other symbol to form a winning combination. What’s more, it also substitutes for scatters, and can award players up to 1,500 coins.

Despite its lack of a bonus round, we think this online slot is the perfect addition to Bodog’s growing online casino game selection. Ideal for both beginners and those who simply wish to unwind while spinning, we’ve decided to give this game a 5-star rating. Its layout is easy on the eyes and its simple payout structure allows for frequent wins. The theme is fun and cleverly conveyed through graphics, sound and symbols, and if you’ve ever watched Sons of Anarchy, you’ll quickly notice just how closely the game resembles the intense and crazy world of SAMCRO.