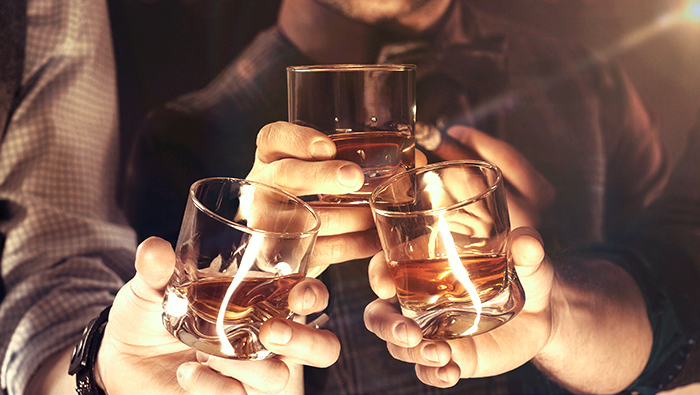 About a month ago, I wrote a post on the best cigars to bring to summer parties. Think of this blog as part 2 because there’s something about whiskey that goes so well with a quality cigar. If you haven’t yet taken the plunge into grain-mash spirits, grab a tumbler and a bottle of golden nectar, and let’s get started.

Whiskey Basics
Whiskey is an umbrella term for distilled spirits made from fermented grain mash. Mashing is the technique brewers use to activate enzymes by steeping grains in hot water, thus converting starch into fermentable sugars. But there’s no need to get caught up in the details.

Whiskey includes bourbon, rye and Scotch. These variants differ in where they’re brewed and what kind of grains are used. When choosing where to start, it’s best to get the most readily available bottles in your location. If you’re in Canada, start with rye or even some Scotch; if you’re in the States, start with bourbon.

Single vs Blended
When starting out, it’s advisable to stick to single malt whiskeys in order to figure out what you like and what you don’t like. Single malt just means that the bottle is made up of whiskeys that were all produced at the same place. The youngest whiskey added to the mix gives the overall bottle its age. Glenfiddich is an example of a single malt Scotch whisky produced in Scotland (all Scotch whiskys come from Scotland). You can go a step further and find a bottle of whiskey made from a single cask – but this is tough to find and not always worth it.

After mastering single malts, you can explore the rich world of blended whiskey. These spirits are made up of whiskeys from different distilleries. Blended whiskey brands you may recognize include Jameson and Johnnie Walker.

Ice or No Ice?
Whiskey drinkers generally prefer to keep the drink at room temperature. Adding about a capful of distilled water will make the beverage more functional and prevent your tongue from going numb.

Ice cubes work well too in the beginning, and if you grow to prefer whiskey on the rocks, you’ll want to invest in some actual whiskey rocks. Whiskey rocks are made of soapstone, and chill the drink without altering the taste. Although chlorine is great for killing disease-causing pathogens in tap water, it’s not so great for drinking a $50 glass of Michter’s 10-year single barrel bourbon.