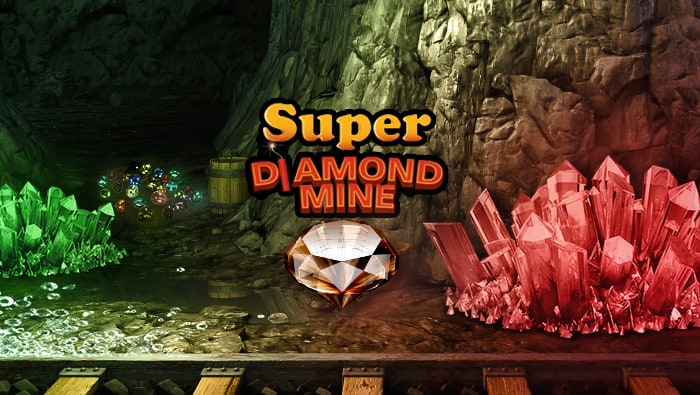 The reels are glittering with diamonds in Super Diamond Mine, and somewhere in that mine is a progressive jackpot worth over half a million dollars (at press time). Grab a hard hat and dynamite, and start drilling because the more diamonds you unearth, the more money you win. To help maximize your mining efforts, the slot game has a bonus feature that adds extra diamonds to the reels.

It’s called the Cascading Diamond feature, and it’ll boost your winnings without you having to lift a finger. The feature causes the diamond icons drop down or go up the reel they land on (depending on where they’re pointing), tacking diamonds onto the icons they pass over. This is significant because each diamond found on the reels, including the ones tacked on by the Cascading Diamond feature, causes a Diamond Counter to increase numerically. When the counter reaches 99 diamonds, hold onto your hard hat because the dynamite explodes, bringing you to a bonus screen.

Super Diamond Mine Bonus Round

The bonus round takes place at the foot of several mine shafts. You’re the director, so you’ll point a gnome miner into certain mines to see what they hold. There are several to choose from; a couple are dangerous, but most are filled with gems, so you must choose carefully. If your prospecting skills are good, you’ll collect a handsome reward.

While playing Super Diamond Mine, it’s in your best interest to bet five coins per line. This ensures you’re eligible for the game’s progressive jackpot. Landing five Mine icons on a payline triggers it, which is a juicy $556,000 as we go to press. Coins can be as little as $0.01 each, so you can stay within your budget while also ensuring eligibility for the game’s biggest prize.

Super Diamond Mine strikes a good balance between traditional slot games and more modern ones. The format is exactly what you’d expect from older online slots, with a modest nine paylines and two-dimensional graphics. But the theme and bonus features are more comparable with newer online slot machines. Next time you’re looking to spin the reels of something that combines the bonus features of a new slot with the format of an old slot, try Super Diamond Mine – that $500K jackpot won’t last forever.