Summer in Ibiza: Part I 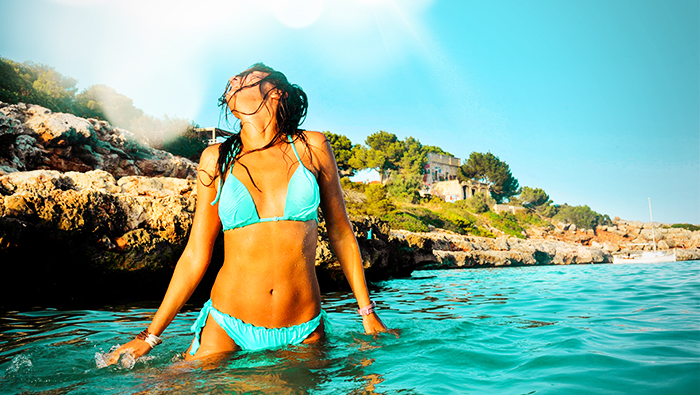 The Toronto Pearson is pretty busy this morning. All the seats in the boarding lounge are occupied by corporate suits and vacationers. Looking around, I’m wondering if some of the vacationers are also going to Ibiza. It’s a long flight, three flights actually. First to London, then to Brussels, then the final destination – a clubbing mecca in the Mediterranean Sea.

Every summer, tons of tourists travel to this island to escape reality for a while. Ask any one of them, and they’ll say, summer in Ibiza is about relinquishing control, and quite often, that happens in a haze of parties, booze and one night stands. The rock-star culture started in the mid 80s when a handful of clubs opened and attracted Europe’s glitterati, who turned the island into a party paradise. VIP treatment is ingrained in their tourism – a lifestyle I’m fully embracing for my trip, starting with my pad.

A buddy and I booked a Club Room at the Ushuaia Ibiza Beach Hotel. The adult-only accommodation is located a few kilometres from the airport and minutes from Playa d’en Bossa Beach. Right across the street is Space Nightclub, which is bumping every night. We can easily stumble between the club, our room and the beach. I even scored some tickets to the Carl Cox Music is Revolution show for July 26.

Now, all I’ve got to do is survive a 16-hour flight with two layovers. The final flight should be a blast though; it’ll be full of Brits looking to party. Some of the best parties I’ve been to have taken place on rooftops and warehouses in East London. Brits flock to Ibiza for spring-break and summer vacation the same way Americans flock to Cancun. Except Ibiza has a stronger concentration of partiers despite the Tourism Department’s attempts to move towards a family-friendly scene. Not that tourism struggles in Ibiza. From what I read, the amount of tourists over there now has passed capacity to the point where the island is running out of potable water. Good thing I’ll only be drinking vodka and beer. It’s time start boarding.