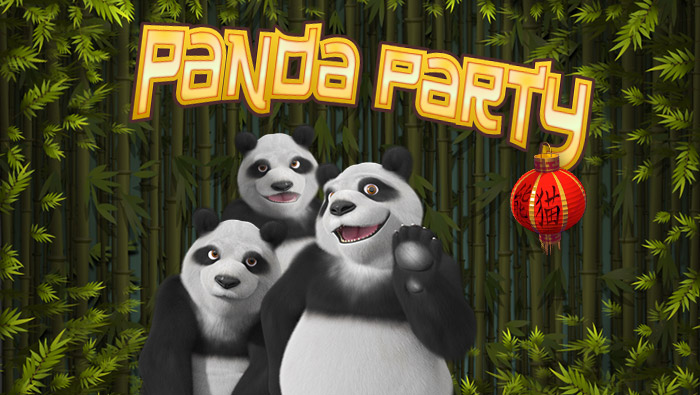 Rival’s Asian-themed iSlot, Panda Party, just recently made its debut at Bodog Casino and we were lucky enough to give it a test spin. From its theme, graphics and sound to its impressive bonus elements, this feature-rich, 5-reel, 20-line slot is certainly worth playing. This game revolves around pandas partying it up in one of China’s many bamboo forests. Though the game’s intro is a little underwhelming, as soon as it ends the soundtrack kicks in and players are given information on how to trigger the Pandamonium Bonus Round (we enjoyed the helpful tip and the clever play on words).

Though the art work is certainly on point, we found that it actually wound up cluttering the layout of the game. The graphics themselves are excellent, but there’s a lot going on here. Those who aren’t used to navigating the interface of a multi-line slot may find it a bit overwhelming for the first few spins.

As far as game features go, this online slot is packed with them, so expect frequent and sizeable payouts as you spin. The Panda Wild replaces any other symbol to form winning lines. Add to this wild multipliers, which vary depending on whether you’re spinning during normal play, Free Spins Mode, the Super Round or the Pandamonium Round, and you’re in for a wild time. The Dancing Panda functions as the game’s scatter symbol, awarding players anywhere between one and 40 free spins when three or more of these symbols show up on screen. Though these standard bonus features are great, there’s no question that the life of this party is the Pandamonium Round, which is triggered when three Red Lanterns appear anywhere on the reels. Not only does this round award free spins, it also turns scatter symbols into jackpot symbols, which pay up to 1,500 coins when you land five-of-a-kind. What’s more, Panda symbols become drop icons where additional multipliers can be won. If you trigger this feature, your chances of winning big are huge.

As for our final verdict? We’re giving this game a 4-star rating. Our overall experience with this game was a good one. Sure, the name of the game is a tad childish and the interface may be a bit busy, but Panda Party’s special features definitely make up for these two shortcomings. If you’re a beginner, we suggest you study the paytable and spin it in practice mode, allowing you to play for free.  Experienced players should go all out and aim for the Pandamonium Round – trust us, you will not be disappointed.