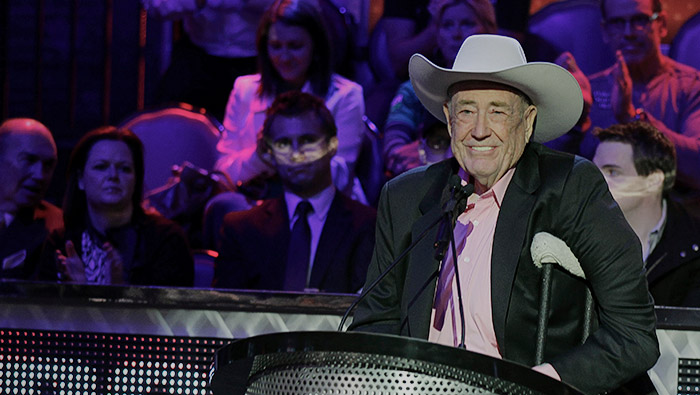 Would any of us be playing poker today if it weren’t for Doyle Brunson? Maybe not. At the height of the poker boom in 2006, Bluff Magazine named Brunson the most influential voice in the sport. He joined the Poker Hall of Fame in 1988, won his first of two back-to-back World Series of Poker Main Event titles in 1976, and has been playing poker professionally since the early ‘50s.

Brunson even wrote the book on poker. In 1978, he self-published Super/System, telling some of his life stories and revealing the strategy that made him a winning player at Texas Hold’em. This book was so influential, it ended up being published widely as a paperback and led to a 2004 sequel, Super System 2, that still holds up to this day. Brunson wound up appearing on most of the TV shows from the boom years, from Poker After Dark to High Stakes Poker and The Big Game. He even showed up on the new streamed version of Poker After Dark this summer, at age 84.

A Poker Legend Is Born

If it hadn’t been for an unfortunate workplace accident, Brunson may have made his name in the NBA instead. The West Texas native was a star athlete in high school across multiple sports, and one of the top 10 college basketball players in the country according to Dell Sports. But just as the Minneapolis Lakers (now the Los Angeles Lakers) were showing interest, Brunson broke his leg in two places working at the local US Gypsum plant. He spent the next two years in a cast.

Instead of heading to the NBA, Brunson stayed at school and ended up getting a Master’s degree in education, paid for with his poker winnings – Brunson was already bossing the table at 5-card draw. When the job market proved far less lucrative than simply continuing to play poker, Brunson hit the road, and his epic journey to greatness began in earnest. It started underground with 7-card stud games in Fort Worth, taking Brunson across Texas and neighboring states, where he and fellow “rounders” like Amarillo Slim and Sailor Roberts would forge their legends playing No-Limit Hold’em against the local captains of industry.

Brunson would eventually settle in Las Vegas, where he was one of the players invited to the first World Series of Poker in 1970. Tournament poker has been very kind to Brunson over the years; he won 10 WSOP bracelets between 1976 and 2005, tying him for second place all-time behind Phil Hellmuth at 14. Brunson also played the “Big Game” at the Bellagio, a mixed game that plays as high as $4,000/$8,000, with a minimum buy-in of $20,000. With any luck, we’ll get to see Brunson continue crushing high-stakes poker for years to come.