No Playlines Means More Ways to Win with Reign of Gnomes 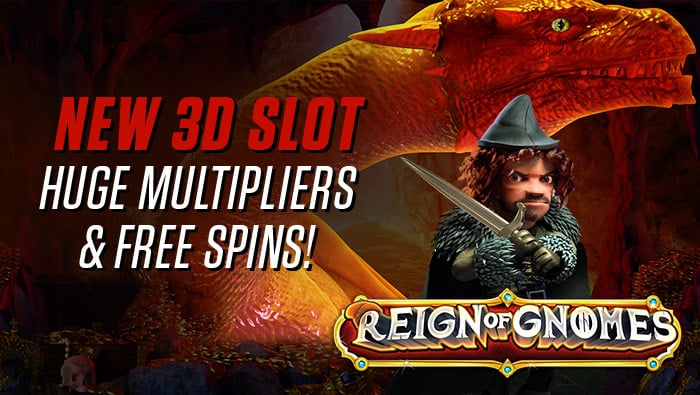 We’re excited to announce the addition of a new 5-reel, 243-ways-pay slot that showcases gnomes. Yes, you heard right – gnomes. Trust us, these are more than just your garden gnomes. These guys are loaded with money and reign over a kingdom. They’ve got so much cash that they don’t even bother with paylines.

That makes things easier for you. Instead of trying to memorize 25 or 50 different paylines, you can focus on more important things, like counting your cash. Payouts are easier to trigger since matching icons aren’t restricted to paylines; as long as matching icons land on at least three consecutive reels, it’s payday.

You can also trust that the game’s wild will do everything in its power to get you extra payouts. Reels No. 2, 3, and 4 are home to the wild symbol; it transforms into other icons as needed to create wins. The only icon it doesn’t transform into is the scatter.

If you can hope for any three icons to land on any given spin, hope for the scatter. Three of them gets you 5, 10, or 20 free games, which is a great feature, and to make things even better, each free spin is accompanied by the Golden Amulet Bonus.

The Golden Amulet bonus takes you into a dragon’s den full of gold coins, treasure chests, and skulls. If you dare, spin the amulet for a chance to win a multiplier, a WILD bonanza, a Diamond bonus round, or an opportunity to Spin ‘Til You Win.

That is unless you don’t play. So pull up a chair and get comfortable because the gnomes are waiting for an heir. Will it be you? Click the link to play Reign of Gnomes now.