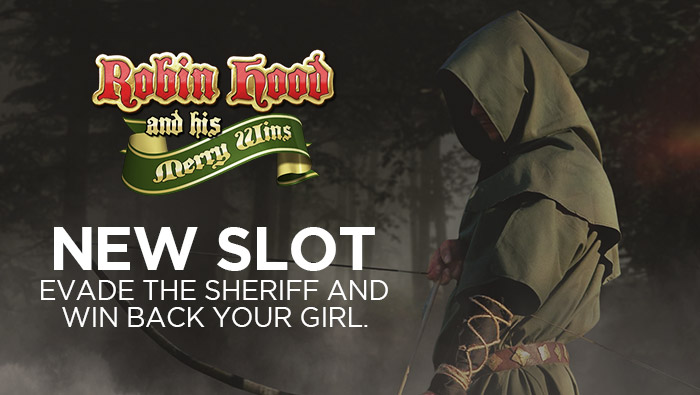 The newest game added to our casino takes you back in time where you’ll visit Sherwood Forest – home of Robin Hood and his merry men. As you spin the reels, you’ll get to take part in an archery competition, rip away “Wanted” posters, and enjoy all the benefits that come from free spins. Successfully pass the obstacles set in your path by the sheriff of Nottingham and King John, and you’ll win the favour of Maid Marian.

Up high in the tree tops, Maid Marian waits to see if you’ll pass all five levels of the “Marian’s Prize” bonus round. Each round sees five “Wanted” posters plastered on trees, hiding your merry men and the evil sheriff of Nottingham, who’s waiting to take you into custody. Tear down one poster and see what’s underneath; if it’s a comrade, you safely advance to the next round, which comprises another five posters hiding the same characters. If you pass all five levels, not only are you reunited with Marian, but you collect the final multiplier award as well.

On The Mark Bonus Round

Another way to gain Marian’s favour, and earn a bonus pay, is by flexing your archery skills through the “On The Mark” archery competition. Choose one out of three bull’s eyes, and shoot your arrow at it. Each bull’s eye has a unique multiplier award that’s concealed until it’s hit by an arrow. Yank out your arrow from the bull’s eye and collect your reward for impressing the audience – and Marian.

To see Robin Hood in his full glory, you’ll need to continue playing until you trigger the game’s Free Spins mode. During regular play, Robin Hood is a standard wild. He can take the form of any icon (other than scatters) in order to create a winning line where there was none before. During the game’s free spins session, Robin Hood turns into a stacked wild, taking up the entire reel when he lands feet first. This upgraded Robin Hood Wild results in more wins.

After trying out this new game, we can confidently say that a heroic outlaw theme, like Robin Hood, makes for a satisfying slot game experience. The characters are all cheery 3D animations, making the game feel nostalgic but also fresh. Try playing today for a chance to steal money from the mean-spirited King John and his equally despicable sheriff of Nottingham. Your merry men await.