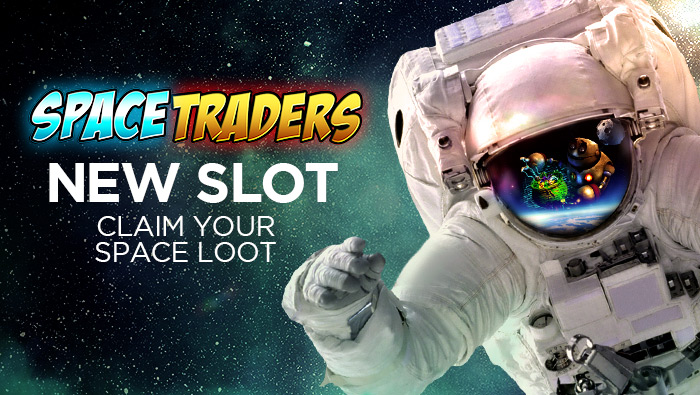 The new online slot Space Traders boasts cinematic 3D graphics that’ll make you feel like you’re onboard a space ship. The theme revolves around a merchant, Queen Bea, who’s known for her selling the highest quality intergalactic goods. Through a bonus round, you’ll get an opportunity to barter with her for some incredibly valuable treasures.

Before getting to the bonus round, you’ll notice the unique format of the game. Instead of traditional reels and paylines, the game uses a 3×3 grid that has spaces for nine icons.

Each space on the grid acts as its own reel, spinning independently from the surrounding reels. The icons you’ll see spinning on the grid include, the characters of the game, rocket ships, bags full of space treasures, planet Earth and more. To start the adventure, simply choose a total amount to bet between $0.09 and $180.00 and hit the green “Spin” button.

The bonus round is called the Space Junk Bonus and is triggered by landing the Space Junk Bonus scatter symbols. You’ll be brought to Queen Bea’s headquarters, where her trusty sidekick Handy Max helps her present five unique artifacts collected throughout the universe. Look over each object carefully because their values vary considerably. You’ll get to pick three items, which reveal their coin prizes. A shrewd business woman, Queen Bea has a satisfaction guaranteed policy. After seeing the total value of your three selections, you can choose to start over again with five new objects. No hard feelings.

There’s a third character in the Space Traders mix: a robot named Sam. He’s an important face to remember, as he boosts your wins during normal play. At the start of each round, Sam generates a holograph of a game icon that’s going to be considered lucky for the spin. If the lucky symbol lands, it locks into place and triggers a re-spin for all the unlocked symbols. If additional lucky symbols land in the re-spin, they lock too, triggering even more re-spins. The feature continues to trigger re-spins until there are no more lucky symbols added to the mix. The best part is, the locked lucky symbols earn double the payouts.

Whether you’re a beginner or a seasoned slot player, Space Traders will offer a unique experience through the format and theme. While there have been space-themed slots released before, none have contained a detailed storyline about a merchant who wheels and deals in intergalactic goods. See if you like the new 9-reel system by playing Space Traders today.