Chicago Gangsters are Front and Centre in The Mob Heist 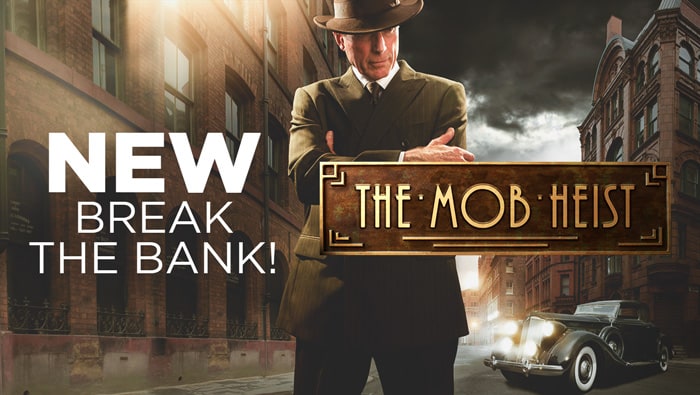 Ever wonder what it’s like to be part of a mob? Now’s your chance to join one of Chicago’s most infamous mobs in The Mob Heist – a new 5-reel online slot. Five gangsters are planning to rob five banks in Chicago, so a lot of money is on the line. They need your help to execute the plan and are willing to toss enough cash your way to make it worth your while.

First and foremost, the mobsters are known for shelling out free spins. They’re spinning through the reels at all times, and when all five of them make an appearance at the same time, a healthy dose of free spins is sent your way. Earn up to 15 depending on how generous the mobsters are feeling, and then start spinning for free.

Regardless of whether you’re in free spins mode or normal play, there’s always a chance you could bump into a cop. Fortunately for you, the police officer in The Mob Heist is as money hungry as the mobsters. She’s a wild and helps complete winning paylines, substituting for all icons other than scatters. Don’t forget to grease her palms after a big win – especially if she helps create it.

One of the biggest wins comes from robbing the banks. Two scatter symbols are required to trigger the bonus round. Equipped with dynamite, you’ll be facing a big bank vault with only one way in: blow off the door. Carefully plant the sticks of dynamite around the vault door and then plug your ears because it’s about to get loud. Once the door is blown off, collect your payout. If you want more, click “Next Bank” and keep adding cash to your money pile. Otherwise you can cut things short by clicking “Cash Out” if you prefer to play it safe.

Your comfort with risk will be assessed once again with the game’s Double Up feature. After every win, you can try your luck against a card dealer who’s willing to double your payout if you can beat him. Four cards are placed face down on the table and one card is placed face up for the Dealer. It’s all luck, but if you can manage to pick a higher card than the dealer’s, that luck translates into 2X the winnings earned from the reels. All cards are revealed at the end of the round of Double Up.

The Mob Heist includes a colourful collection of old school gangsters, including one gentleman who bears an uncanny resemblance to Al Capone. One thing they all have in common is their love of money. Join them in their pursuit to wealth as they steal from the rich – one bank at a time.